DePaul Cristo Rey Valedictorian and Salutatorian Announced
garbsch
May 10 2019 8:30 AM

Two seniors will be honored at DePaul Cristo Rey High School’s commencement ceremony as the valedictorian and salutatorian of the Class of 2019. 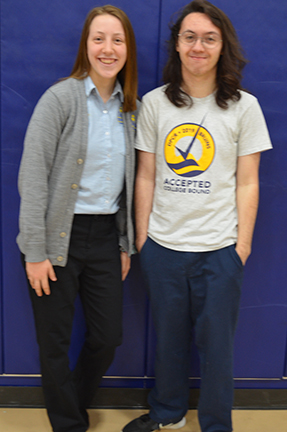 Heidi Cook, a Delhi resident, has been named valedictorian. This award recognizes the graduating student with the highest weighted grade point average in the senior class. After accepting this honor, Heidi will speak to her classmates in a valedictory address during the school’s commencement exercises. She plans to attend Miami University and major in Chemical Engineering. She is a graduate of St. Dominic School.

Ian Dunham, of Northside, is the Class of 2019 salutatorian, recognized as the graduating student with the second highest weighted grade point average in the senior class. Ian will give a student address during the Seniors & Supervisors Corporate Work Study Appreciation Brunch. After graduation, he plans to attend Miami University to major in Mechanical Engineering. He is a graduate of St. Boniface School.

DePaul Cristo Rey’s commencement exercises will be held on May 28 at Mount St. Joseph University.